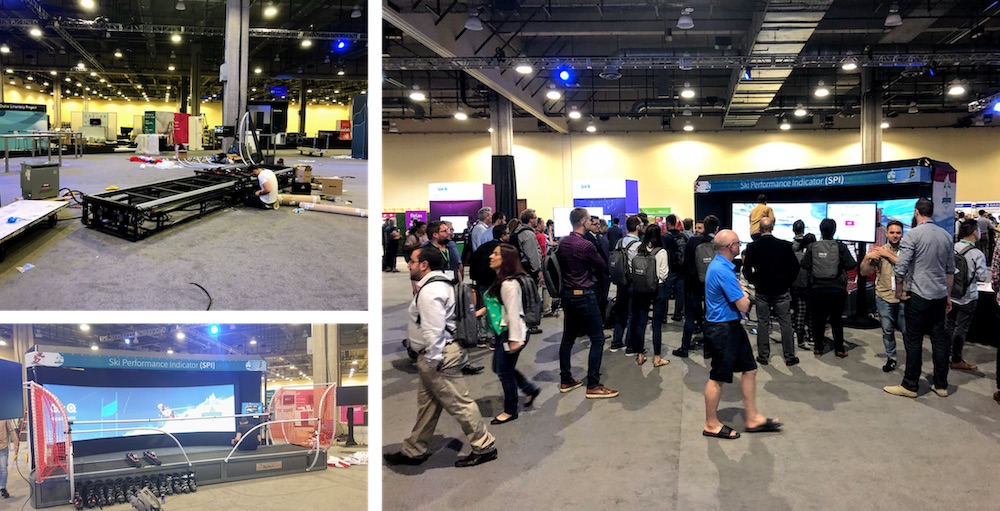 Writing this blog, I have the 'Stones '86 cover of "Harlem Shuffle" in my head. A song I first heard when standing up on a karaoke stage in the early 90's, not the best time to be trying to sing it, one of my more embarrassing moments and there were many. I was slow and clunky when I sang "Harlem Shuffle" back then and it was much the same performance when I hit the slopes in May, at Texas during Qonnections 2019 this year. A Slalom Shuffle more like, I am as good a skier as I am a singer it seems.

Plenty of people were moving it to the left and going for themselves and moving to right but rather than for all night it was for three days. Yes, you've guessed it, I am talking about the Qlik ski simulator which was in collaboration with SkyTechSports.

Attendees at Qonnections 2019 could ski down a virtual but highly accurate 3D rendition of the Pyeongchang slalom course as used at the Winter Olympics in Korea. And being Qlik, we worked with the amazing SkyTechSports team on an integration project to fed real-time sensor data from their ski sim into a couple of Qlik apps, so folks could see their Ski Performance Indicators.

The ski simulator consisted of a platform at just under 6m wide, with an immersive panoramic 4k screen at just over 7m wide, where the course was projected using three 3000 Lm projectors and sound delivered through a Hi-Fi audio system. These things are used all over the world for entertainment and serious athletes alike, including the US Ski Team.

The simulator uses real ski boots that clip into skis on runners which slide side-to-side across the platform. As you go from left to right, sensors on the skis measure your edge angles of the outside of the skis and equate that to speed on the slope. Now because the slope was 3D modelled from accurate GPS data, we were able to pull the geo data points from the ski sim during the event; so we not only knew where you were on the slope in any point in time, we were also able to combine this with the gates GPS coordinates so we could see exactly what line you took down the slope as well.

Working with in close collaboration with our highly talented developer marketing and demo teams, we built a containerized environment to collect and store all of this data in real-time (in milliseconds) and then pulled this data into two Qlik apps, to show the Ski Performance Indicators, in action, there was an 'in-game' analytics app built using Qlik Core and a 'post-game' leaderboard app using Qlik Sense mashups.

The "in-game" analytics app was slicker than ice, developed by Rey Riel from our developer marketing team. The app first scanned an attendee’s badge and collected their details from our event system, when they were ready to ski after a practice run. Next it started to captured data from the ski sim in real time, which was coming out every 30ms. The app then displayed the timing of the skier’s progress down the slope, showing edging angles for each turn, the number of gates passed successfully and the number of errors for missed gates. There was even a beautiful overhead map view of the course and the gate positions where the skiers progress was tracked in real-time from start to the finish line where the race time was recorded and stored, ready for the leader board app.

The subzero cool leaderboard app, developed by Arturo Munoz from our demo team, took data captured from the "in-game" analytics app and aggregated the skiers fastest time, if they went more than once, taking into account the number of gates successfully passed and the number of errors, and then ranked them accordingly. It also showed time per gate, as well as another map showing the line taken down the slope and in-between the gates. It really created a lot of friendly competition amongst the crowd.


Whether people tried the ski sim or not there were great discussions over the apps and the data being shown. I personally had some great data discussions with people, analyzing the data points of their speed and time at each gate and comparing them to those faster than themselves, using Qlik's unique Associative Difference. This allowed them to make real data-driven decisions on what actions they needed to take to better their score and get a higher position on the leader board. And it’s always great when they realize how they could start to apply Qlik into real world scenarios to help with better outcomes. This spurred discussions on topics such as warehousing inventory control, supply chain management and even sales rep performance, all well established use case with Qlik.

The overall experience created a real buzz and high engagement within the Data Discovery Zone at Qonnections; and folks were constantly queuing up to try the ski sim over the three days, there were queues even when everyone else was packing up on the last day!

And moreover, not only did I get to meet our guest speaker Lyndsey Vonn, who popped down to sign autographs. We were also raising money and awareness for the Special Olympics. Qlik donated a dollar for every gate a skier passed. I am pleased to announce that we had over 100 unique skiers, many of whom kept coming back to better their score, who together helped us raise $9,164 USD and I am super proud to add that Qlik.org rounded up the total to $10,000 USD.

You can watch the Qlik Ski Sim in action at Qonnections in this video below.

A big and special thank you to all you skiers who took part and really skied with purpose.

If you would like to know the technical details of the Ski Sim and the in-game analytics app we built with Qlik Core, you can check out Rey Riel's most excellent blog: Ski Simulators – Qlik Core & Real Time Analytics – a Qonnections Story.