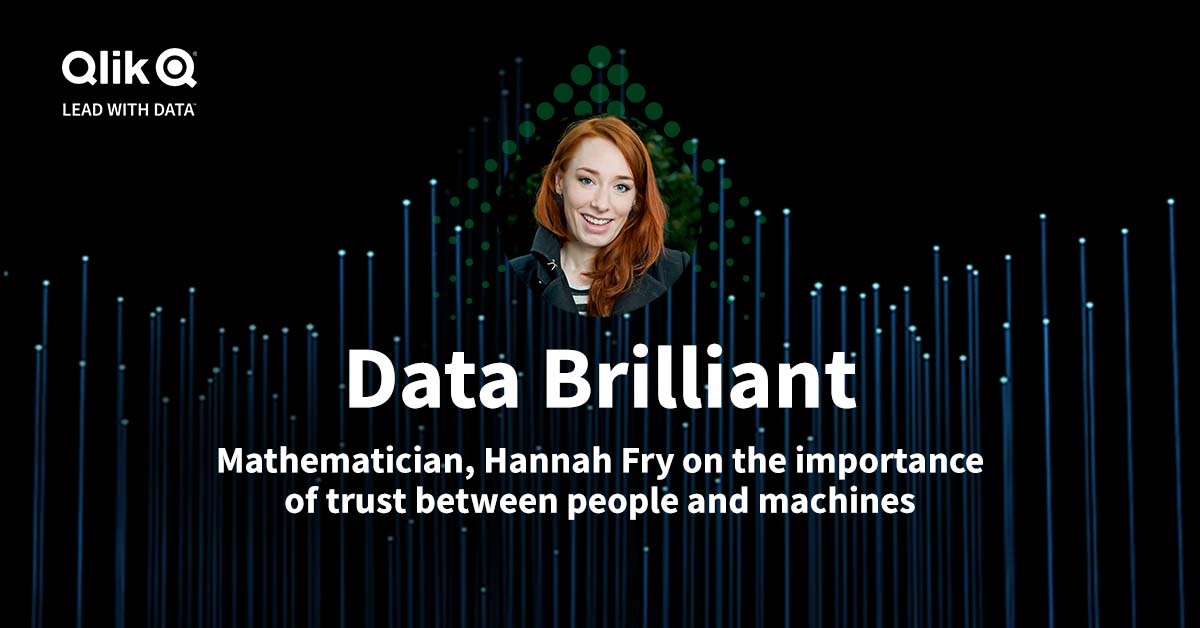 Many people may know me as someone who aims to find a mathematical angle in almost everything. And they wouldn’t be wrong – on my journey to bring my passion for math to the masses, I’ve even shown the mathematical angle for finding love! Yes, really – feel free to read my book on it. So, if there’s just one thing that I want people to take away from my chat with Joe DosSantos on Data Brilliant, it’s that math and data really do touch every part of our lives.

As a society, we tend to put math and data in their own little silo, in the “nerd corner” if you will, and we often assume that’s where it stays. But math, data and, as a result, technology are increasingly embedded in everything we do, and, in turn, we are all increasingly reliant on them. So, the issue around trust, and the role between human and machine has become so prominent for us all, especially as we all find ourselves spending more and more time on those portable little computers that we carry around in our pockets every day.

How Do We Get the Balance Between Human and Machine Right?

We need to ask ourselves: How does this impact how we design algorithms and systems today? As I discussed with Joe, the crucial factor is the human element. And, by that, what I mean is that we need to consider and factor in the very real flaws and failings we as humans have, rather than designing technology in isolation of these. Let me give you an example. I’m sure most people reading this blog post will have used a satnav, and those – like me – that remember the satnavs of eight or nine years ago will know, they had a tendency to lead us down the wrong path. Literally. That’s because the technology wasn’t designed to account for human behavior or how humans would interact with it.

Unfortunately, for some – including those that ended up in the ocean – to turn over trust in our machines and follow them blindly doesn’t always have the best results. Take Tesla as another example. There have been stories in the news about self-driving cars running into problems and causing accidents. When you look at these stories in more detail, it’s often the case that the automation switches off and relies on the human to do the hard part, rather than the technology. But, when you think about it, doesn't it make sense to do it the other way? Have the humans handle the easy part, driving in cruise control down a quiet street, and have the technology kick in to support us when we need the extra help? We need to rethink the way we build this technology, starting with the human and working out how the technology can fill in the things we can’t do.

Because, as discussed with Joe during the episode, there are some great examples out there where technology is actually allowing us to be more human. The city of Bristol in the UK is just one such example. This is one of these pioneering smart cities, which I think the whole world needs to stop and pay attention to. It’s harnessing the very latest technology to detect what people are doing and what they need. In fact, some homes in the area have data points for absolutely everything – which may sound invasive but it’s all with good reason. By accessing the data through all these different data points, you can tell an incredible amount – like if somebody isn’t sleeping, because you can see they’ve been turning the lights on and using electricity through the night. Or, on the flip side, if somebody hasn’t used something where they ordinarily would – maybe that’s because they’ve had a fall or need someone to go and check in on them. So, if you have an elderly relative or someone in your life that needs that extra support, this data can be extremely powerful.

And, when you really look at the impact of this kind of technology, ultimately, it frees us up to be more human. Rather than spending your time together checking if they’re ok or if they’re eating and sleeping properly, instead you can connect with them more, whether that’s using the time together to have a conversation about your favorite TV show or catch up on family news.

It’s Time to Put Past Differences Behind

Whether we want to admit it or not – math, data and algorithms – touch every aspect of our lives, so working together isn’t an option anymore. We can’t have the mindset of humans versus machines anymore; it must be humans and machines.

This switch in mindset has the potential to revolutionize the way we use technology. Instead of using it to replace human behavior, we can build it in a way that complements our weaknesses and builds on our strengths.

We know this approach works and is already having a positive impact in many cases like the Bristol smart city. So, the real question is, what are we waiting for? It’s time to welcome the new era of humans and machines.

How do we get the balance between human & machine right? @FryRsquared explores this question w/ @JoeDosSantos. Her answer: Start with how people behave.