Spotlighting some of the visualizations from the Drawing Data Viz session at Qonnections '17! 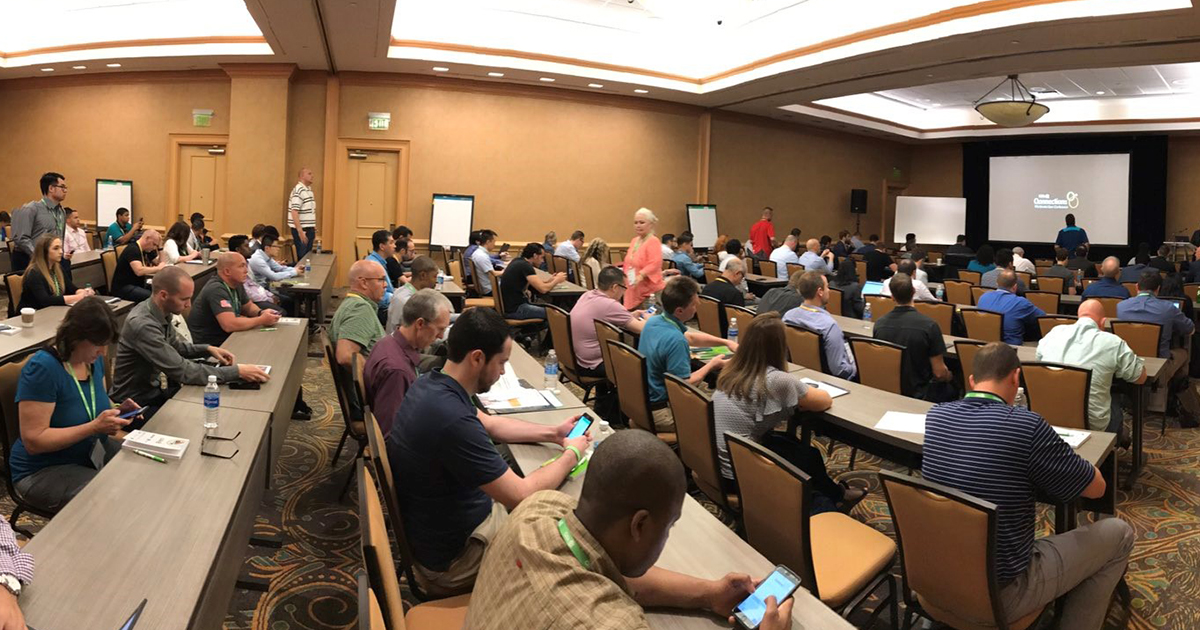 For those who may not be familiar with last year’s smashing success, here is the simple concept:

Attendees were asked to split up into groups and each group was given a large sheet of paper and colored pens in order to redraw a very busy data visualization as shown on the big screen of the conference room.

Last year we saw 20+ group submissions, all of which are on display in the blog post linked above. This year, we had fewer groups but some truly imaginative compositions. The format was tweaked slightly and the groups were given a complex data set (Yale Climate Opinion Maps – U.S. 2016) with a few basic visualizations displayed on the website. The task set forth was to find new and interesting ways to visualize this information. Here are just a few of the creations:

Randy Olson: “I really like how this one focused a lot on geography of the data, regardless of whether I agree with the theories or not. I like that they wanted to explore the geography of the data more than just looking at what is belief by state or by county but what’s actually meaningful: groupings of the state and of the county.”

Alberto Cairo: “That’s a very good point. The way that you combine or aggregate data can also reveal things. I don’t know if grouping the cities by size like big, medium and small will reveal anything, but if it does, it’s worth showing that way vs. showing all cities at once. You can just aggregate and say: ‘In general, people in bigger cities tend to believe more in climate change than people in smaller cities’ and then you show the averages.”

Alberto: “They wanted to highlight the geographic patterns on the map with a red and blue color scheme. Which could be controversial because it’s associated with Republicans and Democrats. The Y axis is the percentage who believes in climate change and the X axis size is proportional to the population, so California would be much thicker than Montana for example. It’s an interesting way of showing the data, it’s a nice sketch as well, very nicely drawn.”

Randy: “It’s along the same lines as a cartogram – reworking the US map to where the states are scaled by their population rather than their geographic area. Although here we strip out the geographic component, which may be helpful if there isn’t actually a story there. The top one seems to suggest there are climate zones where people are more likely to believe in it or not perhaps because they experience it directly.”

Randy: “I like the artistic component of this. They are showing simple percentages on the left, and in the middle of the donut, they put a visual representation of what that percentage is related to and I thought that was a nice touch. So after reading the text, you can understand that hearing something about climate change is associated with a newspaper and the fear of global warming is associated with “The Scream” painting by Edvard Munch. I like that this was set up a bit like an infographic. It’s not just ‘let’s display random bits of data/ideas’ it’s more of ‘let’s organize it so we can tell a visual story here’.”

Alberto: “That’s another very nice thing about this one: they tried to go a little bit beyond the original intent of the graphic and tried to incorporate other variables that may explain these variations that are observed in different regions. In the US, the media consumption and frequency and the types that are consumed, for example, it’s very interesting. Very nicely executed as well, very nicely drawn.”

Check out some highlights of the #Qonnections contest for drawing #dataviz

Alberto: “They were trying to show if there is a match between the opinions of the majority of the population and the opinions of the representatives in the area. This is an interesting thing to explore. In the case of Florida as an example, it’s outrageous because the majority of the population is well aware that climate change is going to put Florida underwater in the next 100 years or so. But then you have a legislature including a governor who refuses to accept of the existing evidence he has at his disposal.”

Randy: “I thought this was a really nice idea to incorporate outside information to make this a really interesting piece to inform people about how representatives line up with their constituents. I could imagine this being a really nice interactive piece on the NY Times or something like that. You could zoom in and ask ‘Where do I live?’ and show the broader picture. You could also ask ‘How do the representatives in my district represent my beliefs?’ I thought that was a really, really nice idea, probably one of my favorite ideas out of this whole thing.”

Randy: “These are the percentages based off the US average and in the app they went down to a per state basis. I like the idea of putting belief vs behavior into a visualization, but there are so many bar charts here that it makes difficult to see any direct correlation. Maybe the point of this is to point out what they highlight in the subtext of their Qlik app. It’s quite clearly what we see from this chart: belief is always higher than behavior. Maybe there are better ways to represent the data, but it’s a good point to make.”

Alberto: “That’s one of the reasons why instead of the concentric bar chart, a divided or stacked bar graph may have worked better. I wouldn’t recommend the circular bar chart in general – if you are going to use a bar chart, use one, don’t make it a circle. It doesn’t make the graphic more beautiful or more interesting and it doesn’t make it clearer. I would just go with the divided bar graphs ‘Yes or No’ stacked on top of each other. Then you could make the states sortable in different ways from highest to lowest, or alphabetically. Plus if you want to make the visualization more visually appealing? You can add a map and map the variables – it functions as an illustration: informative and attractive.”

Randy: “The color gives us some nice visual cues. You could choose different colors like gray for those who didn’t answer or don’t know to draw more on people’s expectations for what the colors represent. But I do like the idea of using color to encode the characters. I could see this being a really nice animated visualization. Starting with 10 people, asking various questions and they walk around before breaking into their groups based on their answers.”

Alberto: “When the data set is relatively small and you’re only going to display three or four different things using little pictograms of people is something that I like. It makes the graphic more visually appealing. The challenge is if you have more than four questions displayed simultaneously it rapidly grows tiresome when you see so many people. When you have more than four variables on the page it’s much better to go for traditional bar graphs or line charts with no pictorial elements. But, if it’s just for the intro page in which you show a summary of all the data: using little people to represent reality adds to the visual interest of the graphic.”

It goes without saying, but we want to extend our thanks to Alberto Cairo, Randy Olson, and all of our teams who contributed to the 2nd annual Drawing Data Viz at Qonnections!