The world has become much more conscious of the power that data can have. 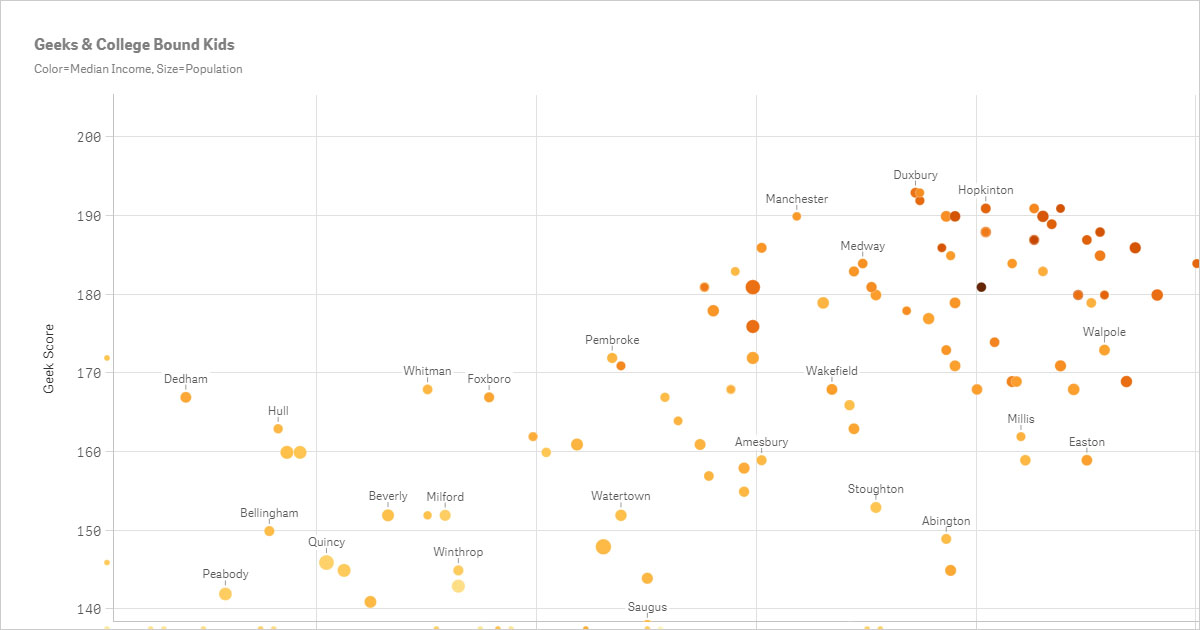 Last winter, around this time, I remember sitting in a meeting where it was suggested that anyone could analyze data in Qlik Sense. To be honest I was a bit skeptical.

I love data. Back in the day before computers in schools, I would lovingly draw charts and graphs on transparency paper that could be layered over each other and hand them in to my teacher as an ‘interactive’ animated data story. This was not normal. Most students of my day did not have this same love for making pretty pictures with their data. Today, however, my children do amazing things with technology.

Soon after that meeting, I was lucky enough to be part of the internal beta for Qlik Sense. It just so happened that my family was considering a move to a new community at the same time. So, I took this as an opportunity to kill two birds with one stone and started putting together an app that would let my family make an informed decision about the move.

The first – and frankly hardest – step was to find the data that I wanted. Standardized test scores and college admissions were pretty easy to download and were well formatted. Real estate data is obviously available but unless you are a realtor, getting access is near impossible. So, I had to manually scrape data from various webpages and turn it into “tidy” data. Distance from our existing town was a factor as well because our oldest son wanted to finish out his last two years there with his friends.

Once I had my data together in various forms, I loaded it up into Qlik Sense and began to build my first app. I created a couple of custom calculated variables. For example, I created a “Geek Score” which was a combination of various math and science test scores for each town. I then compared this to the percentage of students in each town that attend college. As you can see, these are highly correlated.

#Analytics really is for anyone. See how data can empower people to make informed decisions!

I was having a bit of fun zooming in and out of the scatterplot and making good use of the various methods of data interaction that Qlik Sense offers. Just then, my 10-year-old son wandered in to say hello. His timing was excellent. I wasn’t doing “boring” spreadsheet work, I wasn’t in the middle of writing out a bit of “code”. As far as he was concerned, I was playing a new game and he wanted in. In fact, he quite literally grabbed my mouse and just started clicking around the screen and asking me questions about what I was doing. Once he realized that it was about something that he cared about – where we were going to live – he was hooked.

I could have brushed him off and told him that I was busy working. But instead, I decided to see just how easy Qlik Sense could be. With very little coaching from me, hespent the next half hour exploring the data, building his own charts, and answering every question that he had. It was a little scary and a lot awesome.

Now when I encounter people who react skeptically when I say that we have a deep desire to make analytics accessible to absolutely anyone, I share this story. Because I do really believe that analytics is for everyone.

We are doing things every day to try to empower more people to do more things on their own. And the world has become much more conscious of the power that data can have. So, we are seeing huge improvements in our ability to share data more easily without needing a data scientist to do it. But to make it really work, we still need to understand that the data is still the hard part. It is easy to put a pretty picture in front of a database that IT has worked years to perfect. But please let’s not forget about all of their hard work and assume that it goes away with a shiny new product. The hardworking souls of your IT organization are the fuel that make the corporate engine go.