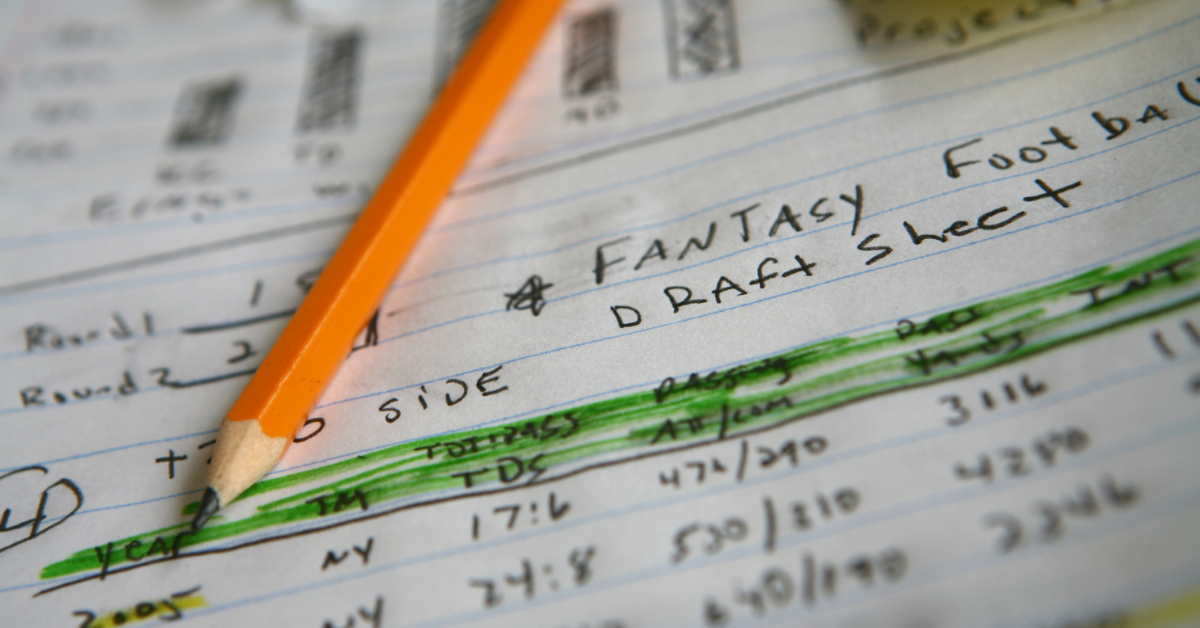 By this point in the NFL season, most season-long fantasy football has come to an end, and league champions have started to flex their bragging rights’ muscles. For me, let’s just say that I will not be doing any bragging. It was a tough season for my fantasy team. My roster was littered with players who spent some time on the injured reserve list. Even through all of that, I was still vying for the last playoff spot, ultimately, to no avail. I am hoping that next season brings better luck.

As you probably know, each August we put together the Fantasy Football Draft Analyzer app, which pulls in player projection data from at least six different fantasy football projection sites, collates the data, adds in your league’s scoring rules, and spits out customized player projections based on those scoring rules. Now that the fantasy football season is complete, I wanted to look back and see just how close, or far, those projections were based on the player stats from the season. Look, I know first-hand that injuries play a major role in overall player production. I will not only talk about players and their actual fantasy points scored, but also the expected total fantasy points scored if the player was able to play in every game (17 games). It’s still not perfect, but it will provide some insight into preseason projections versus actual stats.

I’ll use the scoring from my league to calculate the both the preseason projections and actual fantasy points scored. My league scoring is based on a standard ½ PPR league with six points for offensive touchdown (passing, rushing, receiving). 0.03 points for each passing yard and 0.1 points for every yard rushing and receiving.

Now, let’s pretend that every player was able to participate on all 17 regular season games, and they performed at the same level every week. How would that affect our top 10 scoring list? To do this, I took the weekly average points scored for each player and multiplied it by 17 weeks (I know it’s not ideal, but it at least gives us an idea of potential overall scoring). Five of the top 10 Total Fantasy Points Expected leaders played in all 17 regular season games. Those players are Josh Allen, Tom Brady, Justin Herbert, Patrick Mahomes and Matthew Stafford. The other five players missed some games and therefore left some fantasy points on the table. Those players are Derrick Henry (-200.36 from Exp FPTS), Kyler Murray (-68.55), Aaron Rodgers (-23.10), Dak Prescott (-22.88) and Joe Burrow (-22.01).

Josh Allen delivered on his preseason projection, outscoring his projected points by ~26 points. Los Angeles Charger, Justin Herbert, was another quarterback who exceeded his preseason projection. He overproduced by the tune of 76.52 points. On the flip side, injuries caused Lamar Jackson (-138.64) and Kyler Murray (-68.49) to underperform versus their preseason projections. If we compare our preseason Top 10 by position versus Actual Points Scored, we see that seven of the 10 appeared on both lists.

The wide receiver position saw a handful of players come into their own as Cooper Kupp (+169.3pts over Proj FPTS), Deebo Samuel (+129.1pts), Hunter Renfrow (+105.2), Ja’Marr Chase (+81.8) and Dionte Johnson (+39.5) topped the list of Actual Points Scored, despite not appearing on the Preseason Top 10 Projected Points list. And, as those players outperformed their preseason projections, other players, through injuries to them or their quarterback, underperformed this season. Calvin Ridley (-185.9 under Proj FPTS, 12 games missed), DeAndre Hopkins (-118.5, 7 games missed), DK Metcalf (-21, 1 game missed) and A.J. Brown (-71.2, 4 games missed) all failed to stay in the Actual Top 10.

As we know, you cannot predict injuries, although for next year’s projections, I may also incorporate an availability stat that captures the recent history of players ability to stay on the field to try to understand which players are generally available, as opposed to those players who wind up losing games to injury and other off-the-field issues.

I hope you found this information useful. Here is the link to the app if you want to dig in yourself to find some insights. Be on the lookout in mid-August for our annual Fantasy Football Draft Guide to help you win your league and commence bragging!

With the #NFL #SuperBowl in full swing, check out @Qlik's @Qlik_CBO's #FantasyFootball app to see how it can help you win your league next season