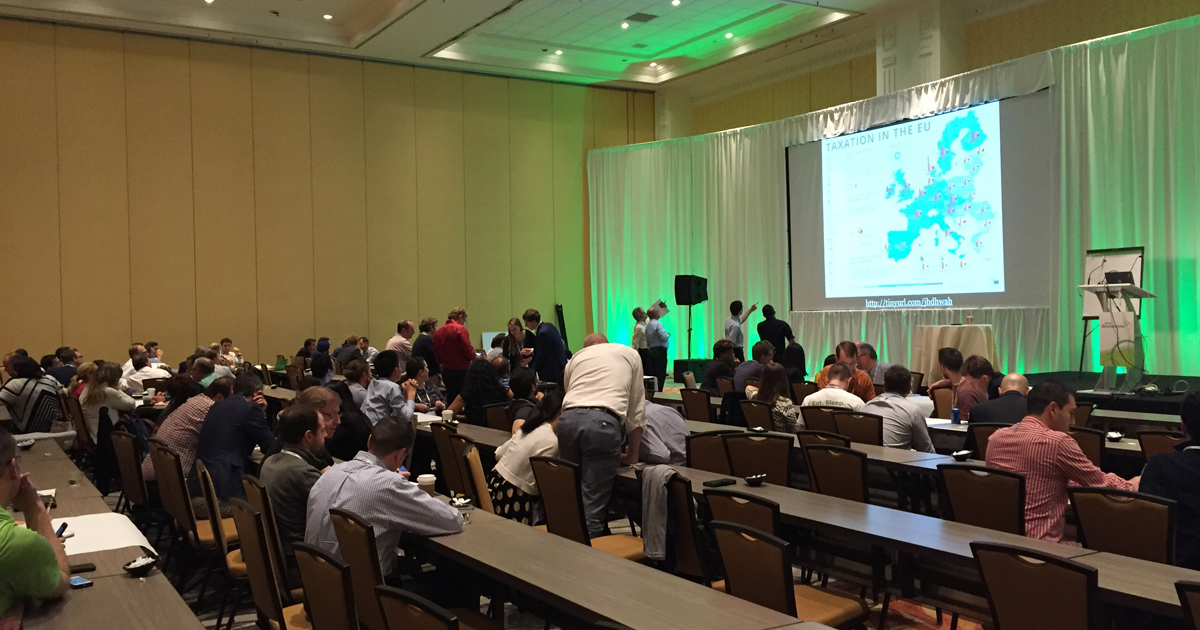 In the process of setting up breakout sessions for Qonnections, Alberto Cairo and Randy Olson wanted to do something unique, fun and educational for attendees.

This was how the “Drawing Data Viz” session came about. Attendees were asked to split up into groups and each group was given a large sheet of paper and colored pens in order to redraw a very busy data visualization as shown on the big screen of the conference room. Here is the data viz that the session attendees were asked to redraw:

Right off the bat, each team had to make a decision on what data they wanted to pull out from the original graphic and then determine how best to represent that data visually. It was clear that each group’s conversations about how to best represent the data went in many different directions.

“The original infographic had so many possible stories buried in the data. It was impossible to see because the graphic forms were not chosen correctly to highlight possible insights in the data. Some groups decided to focus on a narrower portion of the data and there’s nothing wrong with that. Other groups were more ambitious and they covered interactivity. For an exercise like this it’s legitimate to try to do something simpler but do it really, really well.” – Alberto Cairo, Knight Chair in Visual Journalism at the School of Communication, University of Miami

This chart in particular by Chris Abwat-Johnson, LuAnne Leary, Dev Vaghi, Xinzhen and Robert Smith shows a far simpler way to display the data. It shows the percent of taxes both direct and indirect and sorts the countries by percentage that they collect taxes. By focusing on a smaller sample of the data, this group is able to chart percentage trends that may have escaped readers of the previous graphic.

“One of the things I like most about the exercise is most people thinking clearly about the data and trying to display it with simple graphics. I wish we had more time for this session for more iterations. If we did, I would have them try to think outside of the box and see what happens by trying different, unusual graphic forms! Sometimes we tend to stick to the cookie cutter solutions but sometimes trying unusual graphic forms will yield something interesting. You don’t know what works until you try it.” –Alberto Cairo

How would you redraw an out of whack #dataviz? #Qonnections attendees gave it a try!

Speaking of unusual graphics, here is a great example from Nicola who tried to use a waterfall chart, similar to a parallel coordinate chart. This type of chart may be extremely useful to reveal multiple connections between the variables in the data set. Both Alberto and Randy were impressed by this outside the box thinking.

"As I usually say: Try It. If it doesn’t work and it’s not clear, just discard it and try something else.” –Alberto Cairo

From outside the box, we go to an example that is very literally inside the box. This data viz, created by Joel Martin and Tim Grilley of Nordic Consulting sparked the most intrigue by both Alberto and Randy. There seems to be is a fact box for each country and the box is proportionally scaled but we aren’t sure to what. In the left corner is a percentage, the bottom right corner is a ranking number and in the upper right is another percentage. The X axis compares western countries to eastern countries and the Y axis represents overall taxation.

“It’s similar to a bubble chart but with rectangles. It’s a very interesting concept. There is something intriguing about this graphic form. The designer in me is intrigued!” – Alberto Cairo

“I definitely like this especially if the area does correspond to some value from the original. It’s generally easier to gauge squares than circles. I’ve underscored that in some of my past charts.” – Randy Olson, Postdoctoral Researcher and Reddit Community Leader, University of Pennsylvania Institute for Biomedical Informatics

Ultimately, Joel and Tim tried something new and different and found a unique way to tell one of the stories hidden within the original graphic.

Sometimes, there are multiple stories to tell, as illustrated by the chart created here by Ignacio Albano, Caitlin Edmunds, Ian Campbell, Tony Nash, Ann Weiner, Marina Romanova and Andre. This group was one of the only ones to propose sorting controls in the redraw and that caught Randy’s attention.

"I really like that they hint at some interactivity in this chart with sort controls. I absolutely love that idea. We aren’t sure what the story is in the original graphic: it would be best to present this data in an interactive format where people can sort the data in different views. They could then find the story in the data.” –Randy Olson

Hmm, finding the story within the data, that has a really familiar ring to it…but I digress. We’ve highlighted just a few of the many submissions we received and there were so many other great examples that we want to recognize and you can view them all below. But before browsing the gallery, there are some final words from Alberto that feel like an apt note to close on:

“At the end of the day, data visualization isn’t based just on rules, it’s based on process. It’s like analyzing data in some sense: when you are exploring your data set you explore things like geography, frequency of connections between variables and you use different graphic forms to represent each of those. The reason you do is because each one will yield a different message.” -Alberto Cairo